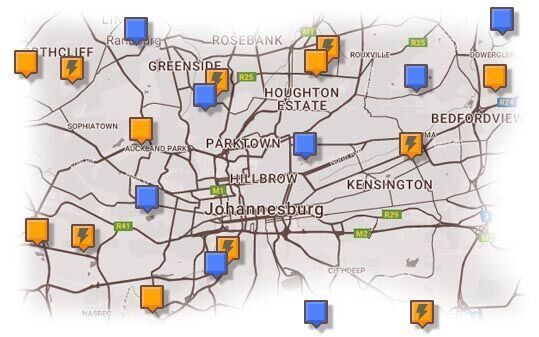 Greater Johannesburg is South Africa's largest and most vibrant city and includes the former municipalities of Midrand, Randburg, Bedfordview and Sandton. It is a region that was built on gold. Gold had been found in the area as far back as 1853 but it was not until 1886 that anyone realized just how big the gold reserves were. By 1889 Greater Johannesburg had grown into a rowdy frontier town full of brothels, beer halls and gambling dens. In that year alone more than 630000 ounces were recovered from the reef. A visit to Gold Reef City Theme Park, a reconstructed gold mining village built around Crown Mines no.14 shaft, will give the visitor some idea of life in the region in the late 19th Century, and a trip can be taken underground down the mine shaft.

To the North of central Johannesburg lies Sandton City, a vast complex of hotels, shopping malls and banks all under one roof. This is, without doubt, the finest shopping complex in Africa and one of the world's finest shopping malls, with over 250 stores and shops gathered together under one roof. Sandton has become the new business centre of Greater Johannesburg as most of the big institutions have moved out of the old Johannesburg CBD. Sandton also boasts four nature reserves, two bird sanctuaries and five river trails. Entertainment in the area includes the Montecasino Leisure Complex in Fourways.

By far the fastest growing town within Greater Johannesburg is Midrand, once known as Halfway House. Midrand is situated just to the North of the N1 highway that circles Johannesburg and is bordered by Centurion in the North. Because of its position halfway between Johannesburg and Pretoria, Midrand has become the most attractive area for industrial and commercial development, and Africa's largest mall is planned to be built there in the near future. The whole of the rural area around Midrand is devoted to equestrian pursuits and there is a Lippizaner showground arena with regular shows of these famous horses. In the Kyalami suburb of Midrand is the famous motor racing circuit where regular meetings are held. There are bird sanctuaries in the suburbs of Glen Austin and Beaulieu. There are two film production studios on the Old Pretoria Road in Midrand.

The number of tourist attractions in Greater Johannesburg are too numerous to list all of them, and can be seen suburb by suburb. There are several live theatres including the large new Johannesburg Civic Theatre, numerous cinemas, helicopter trips, the Johannesburg Zoo, theme parks, craft markets galore, such as the Rosebank African Craft Market and flea markets in several different parts of Greater Johannesburg, including the Bruma Flea Market near Bedfordview. There are the Botanical Gardens, Nature Reserves like the one at Lone Hill, the mini town at Santarama, the Turffontein Race Course near Rosettenville, several bird sanctuaries and nature reserves, ice skating, musical fountains and a planetarium. There is sailing on the Emmerentia Dam, hiking on the Braamfontein Spruit or the Wilds, 4x4 and quad trails, horse trails and numerous museums, such as Museum Africa in the Newtown district. While you're in the area you might as well drop into the SAB World Of Beer. Johannesburg also houses many art galleries, including the Johannesburg Art Gallery in Joubert Park.

If you are visiting Johannesburg over the Easter holidays, then don't miss the excitement of the Rand Show at the National Exhibition Centre in Nasrec.

History and military buffs will enjoy a visit to the SA Museum of Military History in Saxonwald, near the zoo. And if old trains and trams are your thing, then you must see the collection of old public vehicles at the James Hall Museum of Transport, located beside the racetrack.

Greater Johannesburg is a city built on the earnings and expectations of gold. The people are fast go-getters. It is a city bursting with energy and with plenty to offer the visitor.
View Town List
Shows all the towns with accommodation
View $elect Stays List
Shows listings offering a 15% discount to members 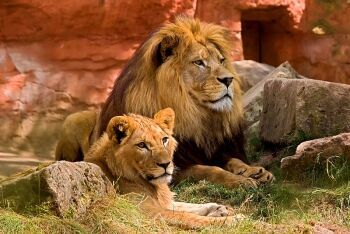 Myth #1: Lions roam the streets of Johannesburg. A: No, but they can be seen at the Johannesburg Zoo. 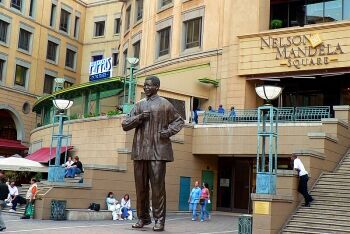 Mr Mandela wondering where his Cornetto went to? 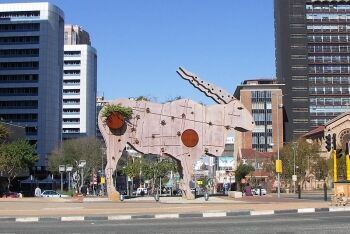 © NJR ZA (License)
Statue of an Eland in Braamfontein, Johannesburg 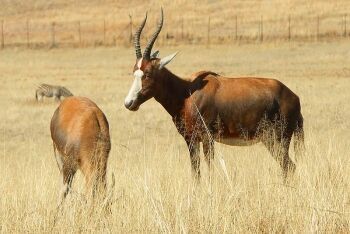 © Nick Roux (License)
Blesbok at the Lion Park in Johannesburg 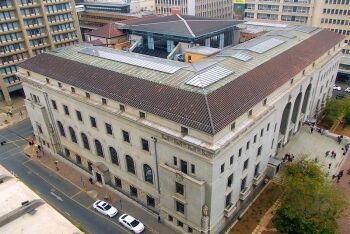 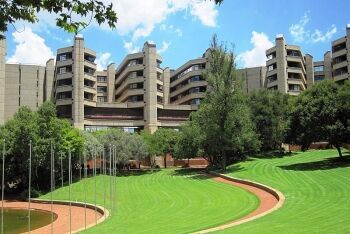 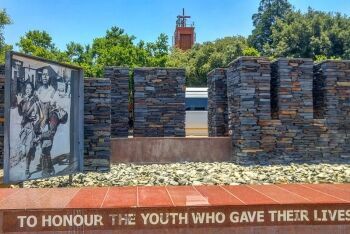 © Martyn Smith (License)
The Hector Pieterson Museum is located in Orlando West, Soweto, just two blocks away from where Hector Pieterson a 13-year old schoolboy was shot and killed during the Soweto uprising. The museum is named in his honour © South African Tourism (License)
Downtown Johannesburg. The city was established in 1886 following the discovery of gold on what had been a farm. Within just 10 years the "town" had grown to over 100,000 people © Antonio Olmedo (License)
Ellis Park Stadium is a 62,567 capacity all-seater stadium in Johannesburg. It was opened in 1928 at an estimated cost of R40 Million (USD 3 million/£2.2 million). It hosted the final of the 1995 Rugby World Cup, which was won by the country's national team, the Springboks © Chris Eason (License)
Inside the Oriental Plaza in Fordsburg. Located on the original site of Red Square (or Freedom Square). During the 1940s and 1950s it was a political meeting place popular with the Communist Party and the site for numerous defiance campaigns and gatherings 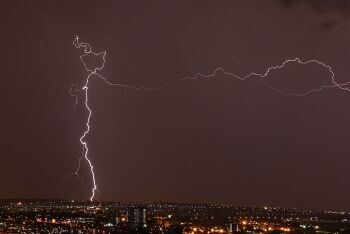 © Derek Keats (License)
Johannesburg, like most of the Gauteng region is often treated to these awesome evening lightning displays 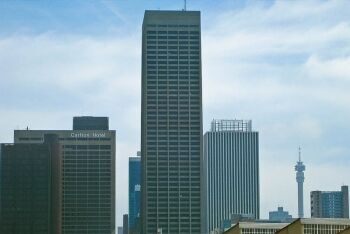 © Jeppestown (License)
The Carlton Centre is a 50-storey skyscraper and shopping centre located in downtown Johannesburg. Standing at 223 metres (732 ft), it has been the tallest office building in Africa since 1973. The building houses both offices and shops, and has over 46 percent of the floor area below ground level 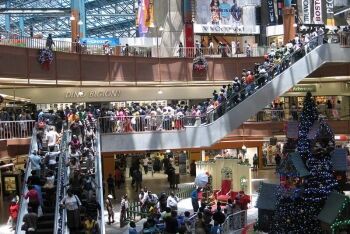 © Jeppestown (License)
Down below ground level in the Carlton Centre Rotunda, Johannesburg. The Carlton Centre is linked to the Carlton Hotel by a below-ground shopping centre with over 180 shops. This busy scene was shot on the lead-up to Christmas 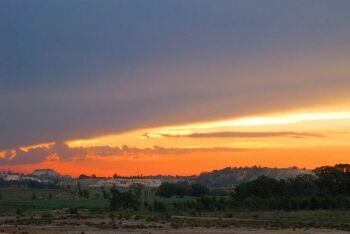 © Jeppestown (License)
Sunset over gold mine dumps (of which there are many) on the outskirts of Johannesburg. © South African Tourism (License)
The Cradle of Humankind is a paleoanthropological site about 50 km (31 mi) northwest of Johannesburg. the site currently occupies 47,000 hectares (180 sq mi) and contains a complex of limestone caves © South African Tourism (License)
Displays at the Maropeng Visitor Centre at the Cradle of Humankind, Johannesburg © South African Tourism (License)
Displays at the Maropeng Visitor Centre at the Cradle of Humankind, Johannesburg. The centre was opened on 7 December 2005 by the then South African President Thabo Mbeki 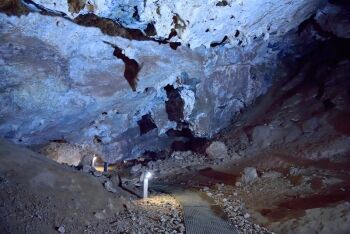 © South African Tourism (License)
The Sterkfontein Caves were the site of the discovery of a 2.3-million-year-old fossil Australopithecus africanus (nicknamed "Mrs. Ples"), found in 1947. Sterkfontein alone has produced more than a third of early hominid fossils found prior to 2010